Deceneus was a philosopher, astronomer, counselor of king Burebista (82 BC - 44 BC).

Deceneus would have been a wise Dacian who lived retired, as a hermit, in a hidden region, some believe in the holy mountain of the Dacians - called Kogaionon. It had been a sacerdot of the god Zalmoxis, and when King Burebista came to the Dacian rule, he was a high priest. Counselor and close collaborator of Burebista, the most important character after the king in the Dacian state, Deceneu helped the monarch considerably in the work of unification and organization of the Geto-Dacian tribes.

Deceneus became king of the Getae in the year 44, after the death of Burebista. He reformed the Zamolxian pontificate. He established the home of the priests of Zamolxe on Mount Cogeon (Kogaionon). He divided the Getae in the order of Pilopor or Pileati and the Order of the Capelutti or Comet. He cultivated astronomy and agriculture among the getis. He built new altars and sacred buildings. You may have followed the architectural canons of Egypt (where he lived) as well as the Orient. 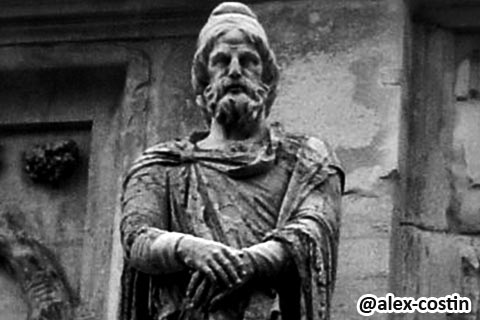 An information in Jordan (Getica: XI, 67) indicates the coming of Deceneus to power, initially as a viceroy, Burebista giving him almost royal power. Strabon says:

"Burebista ... helped Deceneu, a wizard man, who had long traveled through Egypt, teaching there some prophetic signs, which he claimed to interpret the will of the gods. Yet, from time ago, God was also counted, as I pointed out when I spoke to Zamolxe. As proof of the obedience to the Getae, it is also the fact that they have been persuaded to cut down their vineyards and live without wine "

After the Jordan, Deceneu was a man of great scholarship. The historian's account got special data on the cultural and religious role played by Deceneu in the spiritual training of the upper social stratum of sacerdots and Dacian tarabostes:

Observing their inclination to obey him and their native intelligence, he initiated them in almost all philosophy, for he was a skilled master in it. He taught them the ethics, disobeying their barbaric habits, teaching them in physics, making them live according to the laws of nature which the Goths transcribed preserve them until today (VIth century) with the name belagines ; he taught him the logic, making him superior to the other peoples regarding the mind; showing them their practice, urged them to live their lives in good deeds; demonstrating their theory, taught them to contemplate the 12 signs of the zodiac, and through them the course of the planets and all the astronomy, explaining how the moon's disc grows and decreases, and how the sun's fire globe outweighs the roundness of the earth and expose them under what names and under what signs the 345 stars pass from sunrise to sunset to approach or depart from the heavenly pole. See what a pleasure (like) people are too valiant to engage in philosophical doctrines when they have a little wandering of wars. You could see one investigating the position of the sky, another the properties of herbs and shrubs, studying the growth and decrease of the moon, the other observing the eclipses of the sun, and how, through the rotation of the sky, the Sun wishing to reach the Oriental region, is brought back to the western region. Getting calmed down as soon as he gets the explanation of these things. This and many others, teaching the Getae Decene, through its science, shone in their midst as a real wonder. (Recovery; XI; 69-70)

Thus Iordanes portrays the earnestness and understanding with which at least the sacerdotal class concerned the scientific preoccupations, and further on "the most prominent and wise men whom theology has taught, advised them to honor certain divinities and sanctuaries by making them priests, and giving them the name of pileats "(Getica XI, 71)

Deceneu removed the Bacchic or Dionysiac cult associated with vine and organ harvesting. He is the first to oppose vigorously the penetration of foreign cults into Dacia. That is why it is not by accident that it determined the royal authority to order the destruction of the vine - the sacred plant of Dyonisos - and that all the Dacian priesthood supported him in this extraordinary act. As a great priest and viceroy, then himself a king, Deceneu had a dual authority, moral (cutting the vice of drunkenness) and politics (by organizing tribes and sacerdotal caste).

The Decenean made a profound social and religious reform of the Geto-Dacian people, famous in the ancient world. He imposed sobriety and temperance, demanded the people obedience to commandments as the effect of education through righteousness, the Getae being recognized, after Herodotus, as the most righteous of the Thracians.

Iordanes on Deceneus: "By sharing knowledge of physics, he naturally made them respect their laws that they have in their written form until today and call them belagines." In fact, belagine laws are the laws of the Goths, not of the Getae, the term being encountered in Origo Gothica (555), although the author of the text claimed it was ancient laws. More specifically, it is the Ostrogoths' laws. Jordan's work is not considered a historical source of trust, its purpose being to assign a prestigious past to the new ruling class of the Goths.