Herodotus of Halicarnas / Halikarnassos (Greek: Herodotus, Herodotos, n. 484 BC - about 425 BC) was a Greek historian. Herodotus is considered the father of the discipline of history, by treating the events he recorded in his writings. Up to him events were treated in chronicles or epochs. He is known for his writings on the Greek-Persian conflict, as well as for the descriptions of people and places visited.

He was born in an aristocratic family in the town of Halicarnas (in Greek, Halikarnassos, today Bodrum, Turkey). Forbidden to leave his homeland because of the civilian battles involving his family, Herodotos lived for a while in Samos, and after the fall of tyrant Lygdamis returns to his hometown, he travels long and settled in Athens. Here he is among Sofocle's friends, and he is a close friend of Pericle's circle. 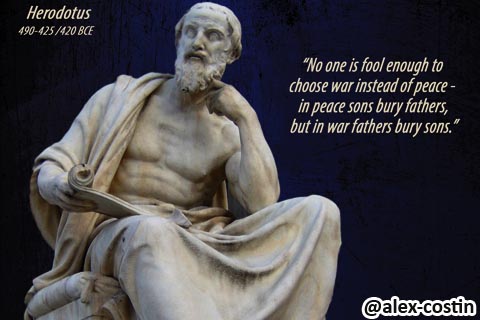 His work, Stories, is a literary masterpiece with many digressions and anecdotes, masterpiece inserted in his stories, written in the ionic dialect.

In his work Historiai (Histories), written in the Ionic dialect and divided into the Hellenistic era in 9 books, Herodot proposes to programmatically approach the first great confrontation between the Eastern and Asian worlds (Grecia), Eastern despotism and Hellenic democracy, culminating in medical wars.

The narrative of the medical wars is in fact only beginning in the sixth book, devoted to the books before the Persian expansionism which it considers a cause of the conflict, describing the subjugated peoples (Egyptians, Egyptians, Thracians) to the Great King's Empire.

His work consists of 9 books, each bearing the name of a Museum, structured as follows:

Herodotus of Halicarnas considered history and geography to be inseparable, for example, the Second Book dedicates it to Ancient Egypt describing the Nile outposts, the occupations of the people, and the conquest of this territory by Cambis II, Emperor Ahemenid.

Herodotus appreciated peoples who opposed Persian expansionism, for example in 513 BC. The Persian empire, under the leadership of Darius I, organized an expedition against the Scythians and Getae who were finally defeated.

The conquest of Sestos (478 BC) by the Athenians concludes the work of Herodotus.

Pater historiae, a title that posterity has given him, is significant for Herodotus' place in the evolution of historical science.

Read and appreciated since antiquity, Herodotus' work has gained new validations in the modern age, and important archaeological discoveries have confirmed the veracity of many of his claims. At the same time, he wrote his name as one of the great proponents of universal literature, equally endowed with epic force, dramatic construction capacity and expressive, vigorous, strongly evocative style.

In approx. 425 BC, the great Greek historian Herodotus is extinguished from life.